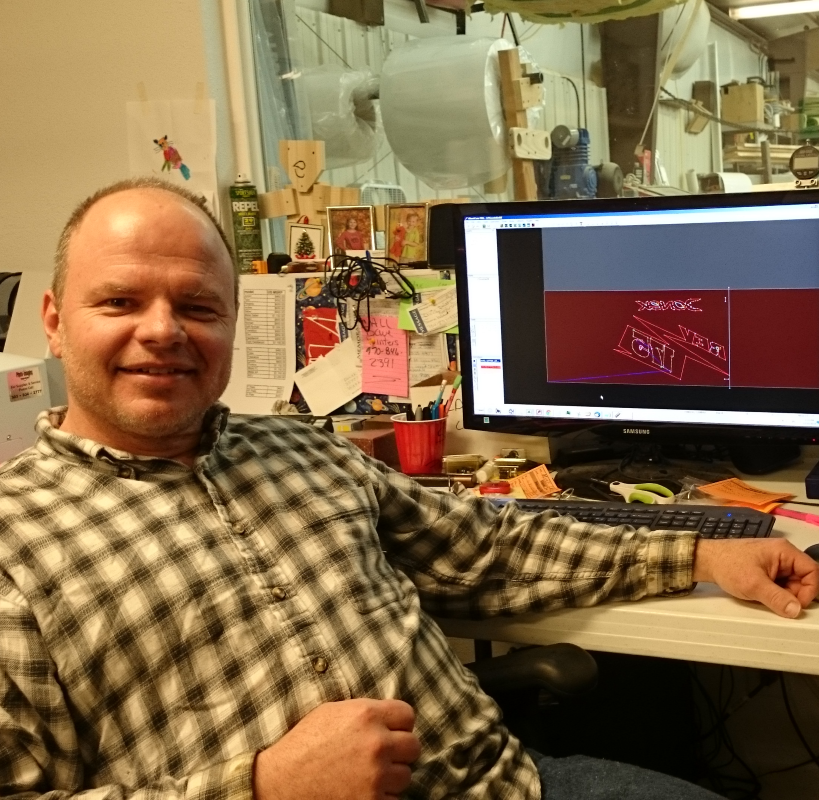 Sean started Donek Snowboards in 1987 and incorporated the company in 1995. He is responsible for just about everything to do with the business. A great deal of his time is spent guaranteeing all the production equipment is operating properly. His dedication to the customer is evident in the fact that he answers all of the e-mails and about 90% of the phone calls. Sean engineers all the boards and manufacturing processes. He trains the employees and oversees every aspect of manufacturing and assembly of every order. Solving challenges is one of Sean’s main passions along with providing a superior product which has been developed with industry professionals. Family, snowboard engineering and business are the focuses for this CEO and he is brilliant at it all.

Board Details
Freeride: I may pick one up again this season
Carve: The MK is my current favorite
Bindings: F2 Race Titanium
Boots: Deeluxe 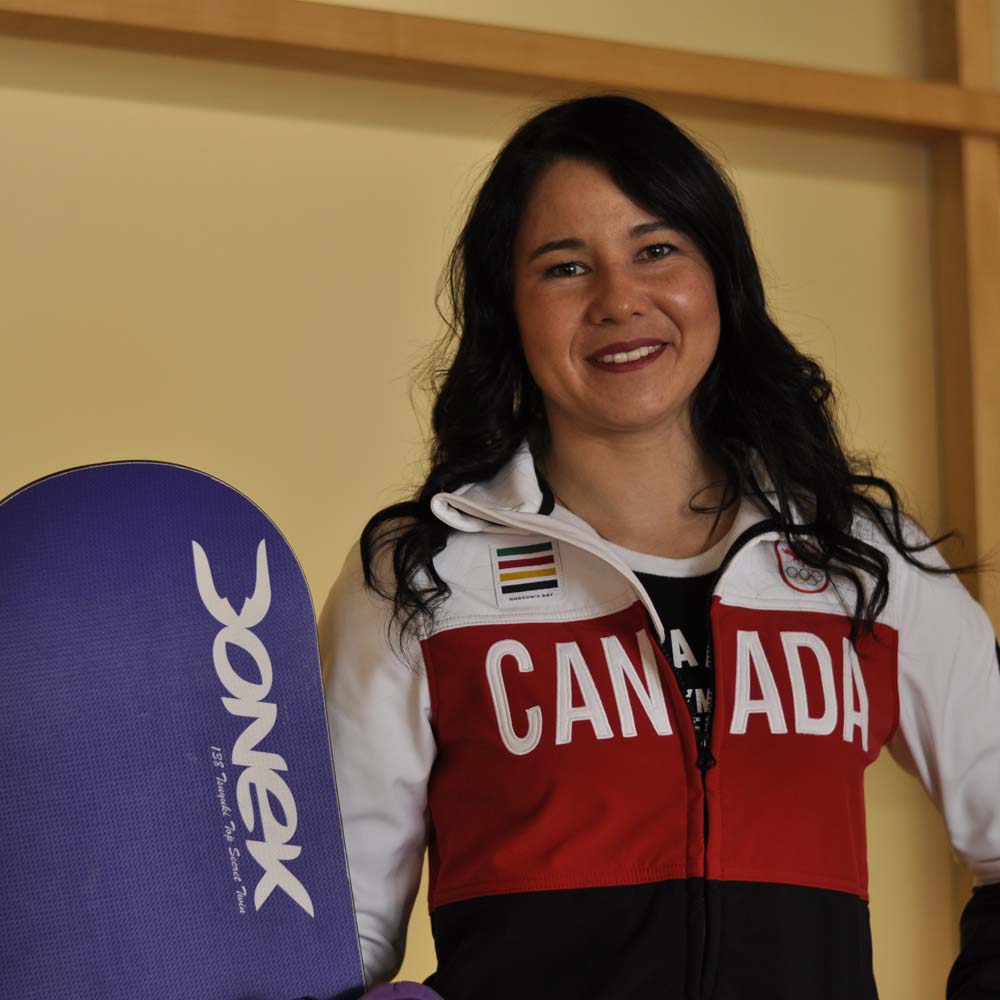 A retired Olympian, Katie started riding for Donek in 2013 and was brought on the crew for marketing in 2016. The Transition model is the model she has contributed to most to for its design as she is a halfpipe rider who noticed a gap in technology and halfpipe riding. Katie’s main roles are digital marketing, social media and athlete manager, and sales. She enjoys working for Donek because of the connection to the industry and ongoing learning about boards. Katie rides the 138cm Transition for halfpipe, a 142cm Park Twin for park and a 145cm Phoenix for powder. 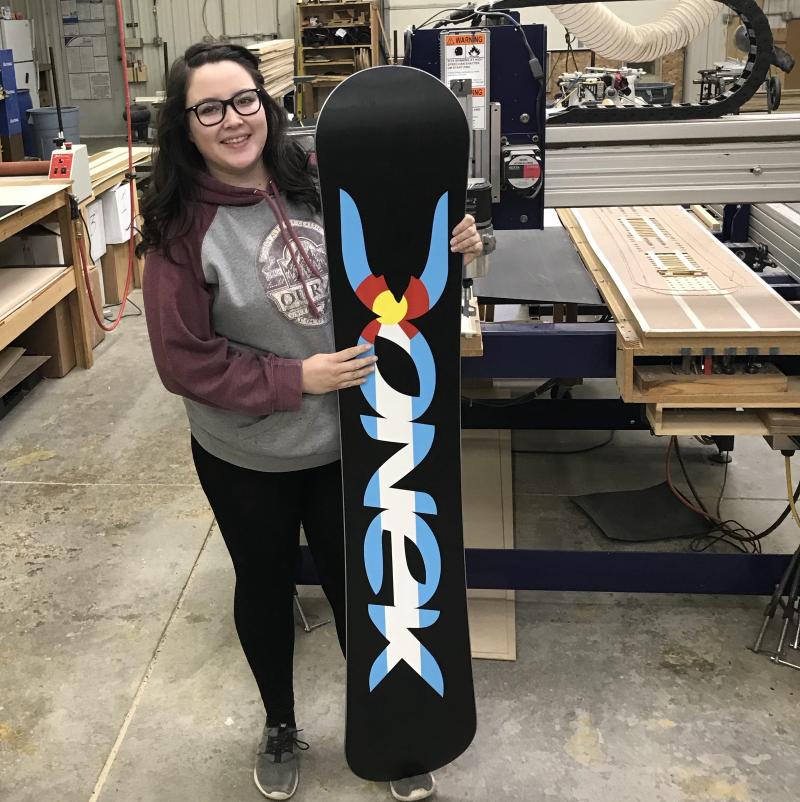 Working as floor supervisor and doubles as a base and prep technician Celia has been with Donek for four years. She doesn’t spend much time on the hill, riding scares her, but Celia loves being a part of the company to see it grow. Her quick eye and intelligence makes her a huge asset to the build and assuring quality products. 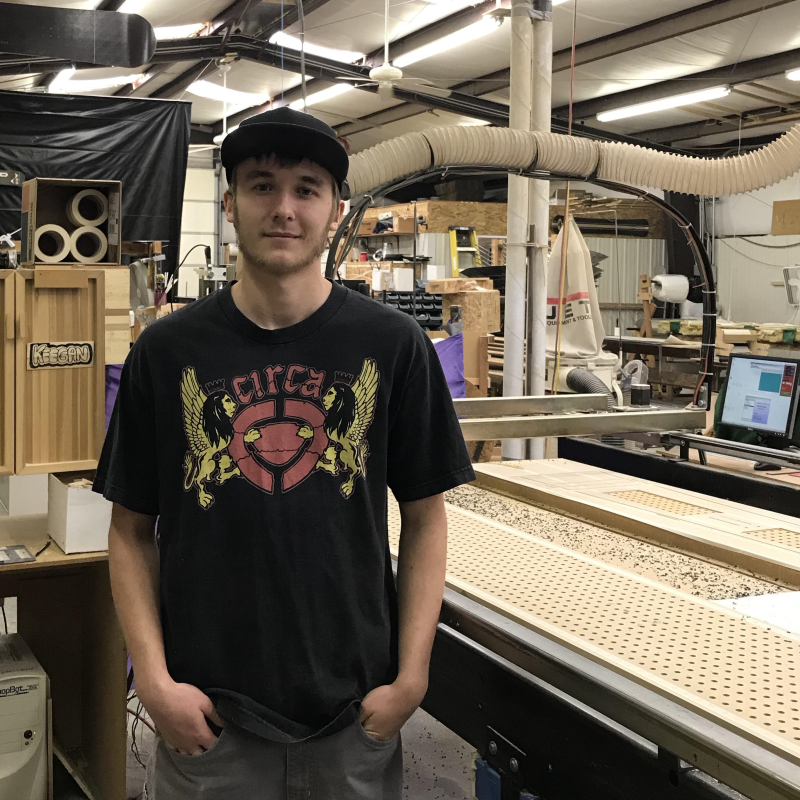 Binding and plaining cores are what keeps Keegan busy. He likes being at Donek because of a cool work environment and he thinks it’s sick how happy our products make people. When Keegan is on the mountain he is on a 158cm Park Twin. You can follow Keegan on Instagram @this_is_keegan 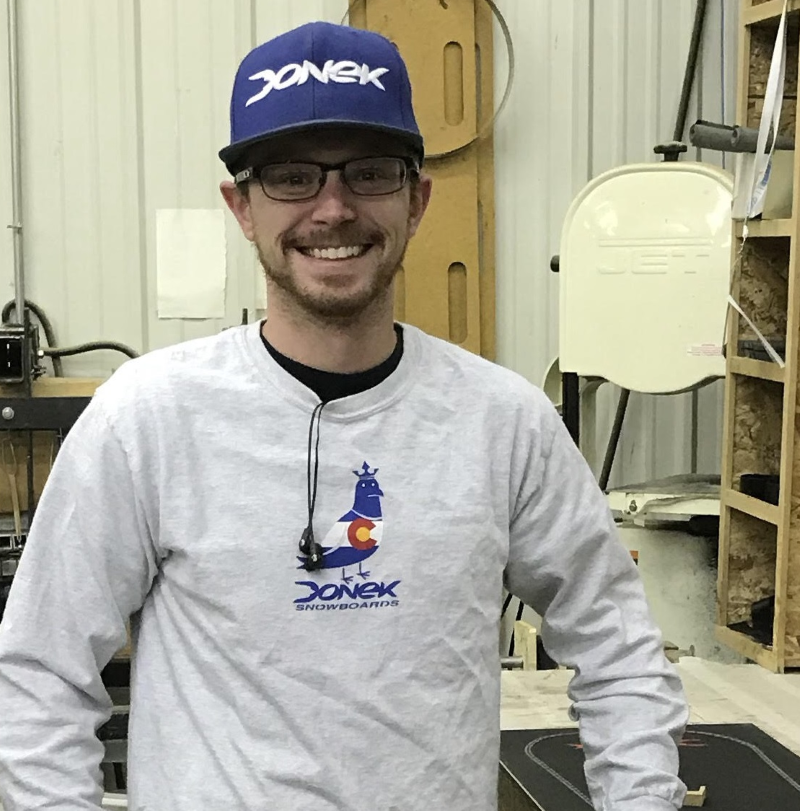 In charge of layup and pressing the boards, Grant takes pride in his work as he appreciates the joy riding gives. He loves building boards and likes how involved he is in the company. Grant values his experiences with Sean and feels he can personally grow in the innovative professional environment. Grant shreds the snow on a 151cm Park Twin. He’s got a cool Instagram too @the_pressman 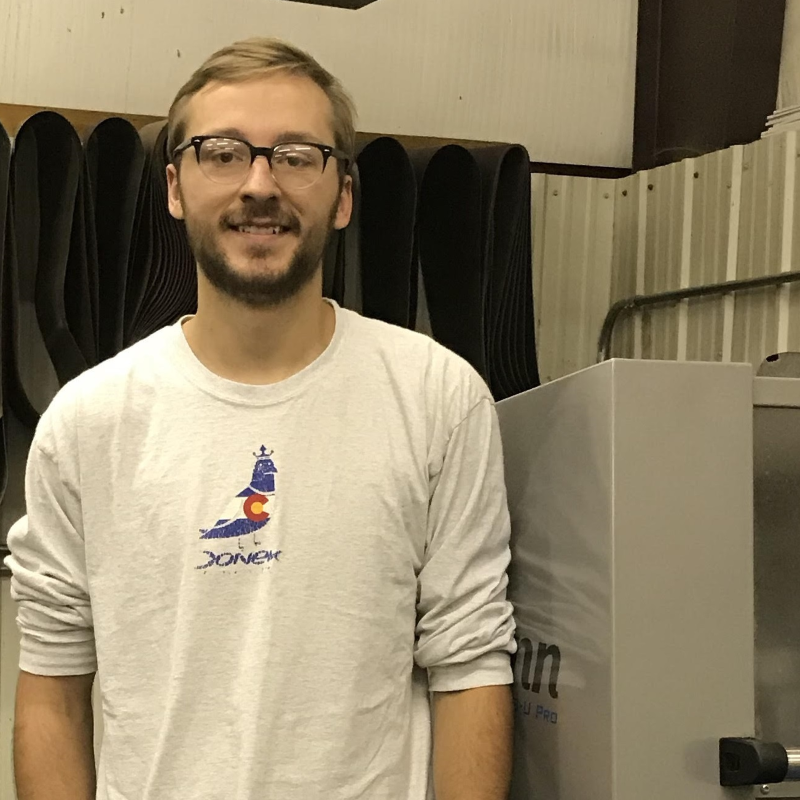 The last process of the build is finishing and Tru is the craftsman for the job. He has some great stone grinding and tuning skills too. Tru enjoys crafting boards that he can really be proud of. He especially appreciates a custom snowboard as he is over six feet tall and needs a wider board. When Tru is on the slopes he’s on a 170cm Phoenix and you can follow his Instagram @truchainz1

Custom Graphics are a huge part of our custom build process, so Sydney is the point-person for all custom graphics projects. Sydney is in charge of preparing all topsheet and base graphics in the computer, printing and transferring graphics onto topsheet and base material, and lots of other odd jobs around the shop. She works with Katie on the graphic design of marketing projects like apparel and merchandise, website design, social media, and demo events. Sydney studied Architecture at University of Arizona for several years, where she gained experience with graphic design programs like Adobe Illustrator, and hands-on fabrication skills. She grew up skiing and snowboarding in North Lake Tahoe where her dad, Randy – a Donek enthusiast, taught her Alpine Snowboarding at age 7 in ski boots and they raced GS together in USASA. She now splits her time on the mountain between Alpine carving on her custom 160cm Voyager, and transferring her aggressive skatepark roller skate skills to park skiing.

Patrick handles lots of different jobs around the shop from laminating core blocks to maintaining inventory. He assists Keegan with core production and Tru with finishing and shipping. He does a lot of the heavy lifting when it comes to moving inventory and maintaining the property that Donek calls home. He’s a US Navy Veteran and fairly new to snowboarding, but when he is on the mountain you can catch him on one of our largest Park Twins. 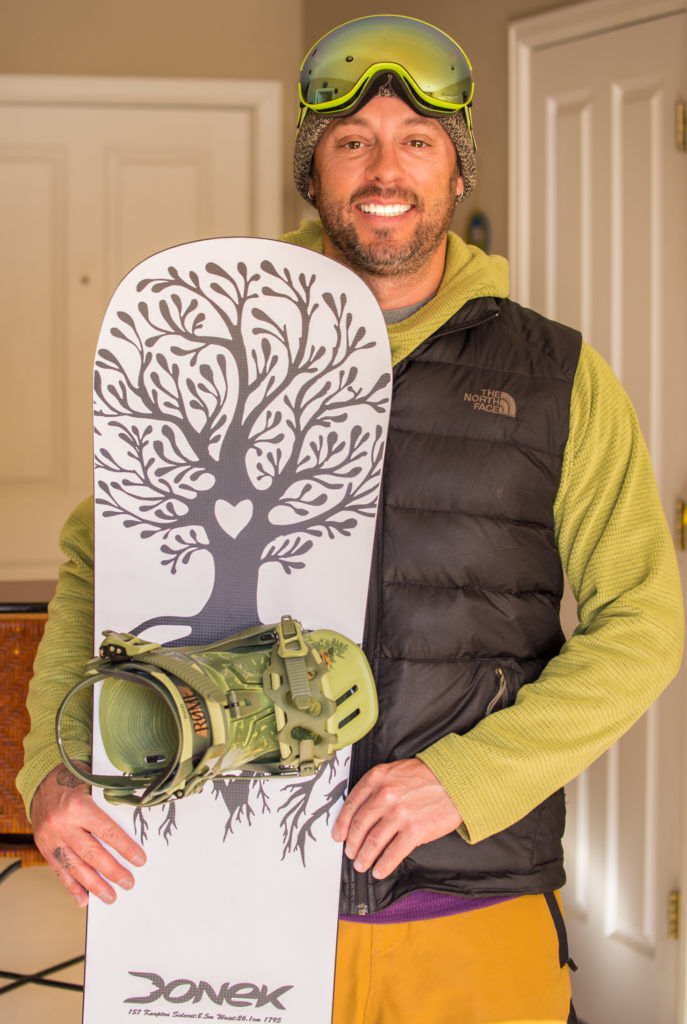 aka @fotophreak, Dave is the guy behind the lens, catching all the action for Donek team riders. Dave is in his 25th season of riding and still finds himself flipping through snowboarding magazines with as much excitement as he had from day one.His love for photography has quickly become part of his passion for snowboarding. Dave rides a Knapton Twin with a custom graphic dedicated to his late sister. Dave has been our resident photo guy in Colorado but he is going to Oregon for some big mountain shooting with our riders on the West Coast. We are looking forward to seeing his adventures over the season. 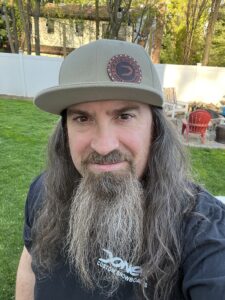 Dave has been riding for over 30 years. He started teaching at Campgaw Mountain in New Jersey way back in 1990 and quickly realized his passion for spreading the stoke of snowboarding. In 1992 he took over as the snowboard director and head staff trainer and co-founded the area’s snowboard race team in 1994.

Dave continued as the snowboard director and snowboard race director at Campgaw for nearly 30 years. In 2017, he left Campgaw and took his snowboard team to Hunter Mountain in upstate New York where he is currently the head alpine snowboard coach.

Dave has been a USASA 200 coach for 10 years and an AASI Level 3 instructor for over 20 years.

All our demos on the east coast of the USA are ran by Dave and his great people. If you are looking to demo a Donek in the New York, New Jersey, Vermont, or eastern Pennsylvania area let us know and we will put you in contact with Dave.

“I love Donek, not just because of the quality of the board, which in my humble opinion is 2nd to none, but because of the personal feel of the company. It’s not often you can call a company and have the owner answer your call, spend time on the phone with you to make sure you get exactly what you want and need. Amazing customer service!” -Dave Hirschberg